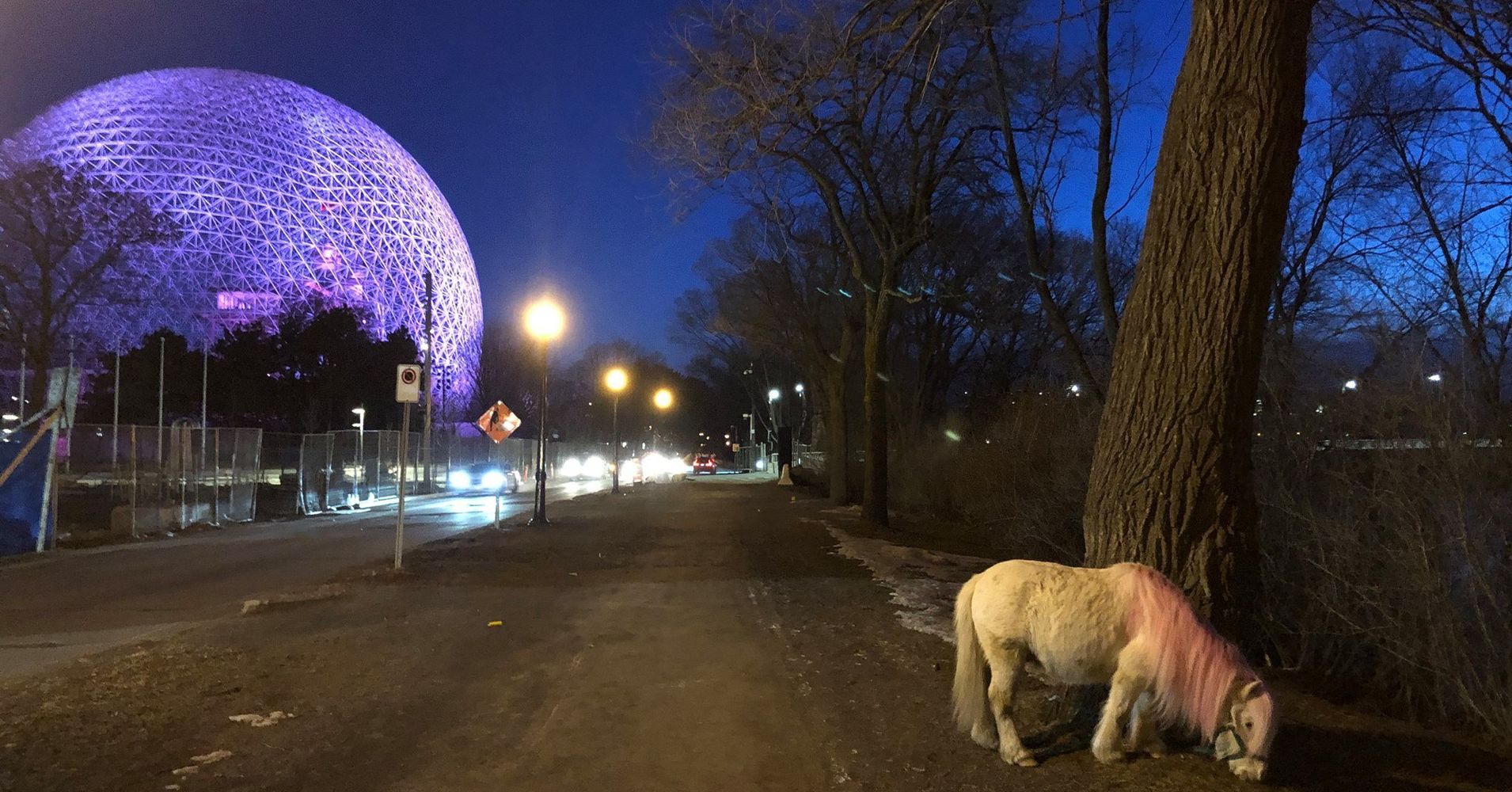 UPDATE: 5:24 p.m. ― While it appeared that a miniature horse with a pink mane was roaming around Saint Helen’s Island in Montreal, it turns out looks were deceiving.

A popular TV show in Quebec called  a “test on the impact of unusual news on digital platforms in order to study its virality.”

“Vlog” went deep in an effort to pull off this elaborate hoax. The show created two fake accounts in the name of Gilles Bouchard on both and Reddit, in which the fictional poster said they saw the horse at Parc Jean-Drapeau in Montreal last Sunday.

In response to the pony being fake, Gabrielle Meloche, chief of communications for the group that operates the park, said that “the Société du parc Jean-Drapeau is just pleased to know that the animal is not/has never been on its site and that we can stop our [search].”

No one knows why or how, but a miniature horse with a pink mane appears to be roaming around Saint Helen’s Island in Montreal.

Many people have claimed to see the animal, which looks like it was ripped straight out of a storybook, in various places around the island since the beginning of the month. It even had  dedicated to it.

Is it a prank? Is it real? Is it a viral marketing stunt for ?

The Facebook group, “Sauvons le mini-cheval” ― “Save the mini horse,” in English ― featured images of the animal wandering around and apparently living its life. The group has since been deleted. (Notably, it had no videos of the pony ― only photos.)

Images of the pony are still floating around on Twitter:

Pony-Unicorn : This picture seems to have been taken at Cité-du-Havre (avenue Pierre-Dupuis). Perhaps consider to widen search area

Gabrielle Meloche, the group’s chief of communications, told HuffPost that they remain on “watch to find the animal, if it is still on the Parc Jean-Drapeau’s territory, and if it is there, we will take all necessary measures to ensure that the animal is safe and returned to the competent authorities.”

“Our teams on the field are vigilant and are actively looking for traces of the animal. To date, however, we have not seen it in the field and our cameras have not allowed us to find it,” said Meloche.

“It is plausible that it arrived via Avenue Pierre Dupuy / Pont de la Concorde or via the Écluses that cross to St. Lambert,” she added.

Meloche also  that her group does not believe the pony is a hoax, though they have not seen the animal on the territory’s surveillance cameras. She said they are looking for the pony “but it may be that it’s gone.”

Where are you, mysterious pink pony?

LAHORE: Pakistan’s former Prime Minister Nawaz Sharif may undergo a heart surgery if his angioplasty is not possible, said his personal physician.Sharif, 69, who has been serving a seven-year imprisonment in the Al-Azizia Steel Mills graft case, was examined on Monday by the doctors of Aga Khan University at the Sharif Medical City in Lahore, […]

WASHINGTON: President Donald Trump on Tuesday vetoed a resolution from Congress directing him to end US support for the Saudi-led war in Yemen, the second such move of his presidency.The resolution was a harsh bipartisan rebuke to Trump that took the historic step of curtailing a president’s war-making powers – a step he condemned in […]

Nearly 300 people are being quarantined on a cruise ship at the St. Lucia port in the Caribbean after a crew member was confirmed to have measles. Dr. Merlene Fredericks-James, St. Lucia’s chief medical officer, confirmed the quarantine on Tuesday in a filmed statement but did not reveal the name of the cruise ship. Neither […]