TOKYO (AP) — The Paralympics began Tuesday in the same empty National Stadium — during the same pandemic — as the opening and closing ceremonies of the recently completed Tokyo Olympics.

Japanese Emperor Naruhito got it all started again, this time under the theme “We Have Wings.” Among the few on hand were Douglas Emhoff, husband of U.S. Vice President , International Paralympic Committee President Andrew Parsons and International Olympic President Thomas Bach.

It was a circus-like opening with acrobats, clowns, vibrant music and fireworks atop the stadium to mark the start of the long parade of athletes.

The opening ceremony featured the national flags of the 162 delegations represented, which included the refugee team. In addition, the flag of Afghanistan was carried by a volunteer despite the delegation not being on hand in Tokyo.

Comparisons to the Olympics stop with the colorful jamboree, save for the logistical and medical barriers during the pandemic, and the hollowing out of almost everything else. 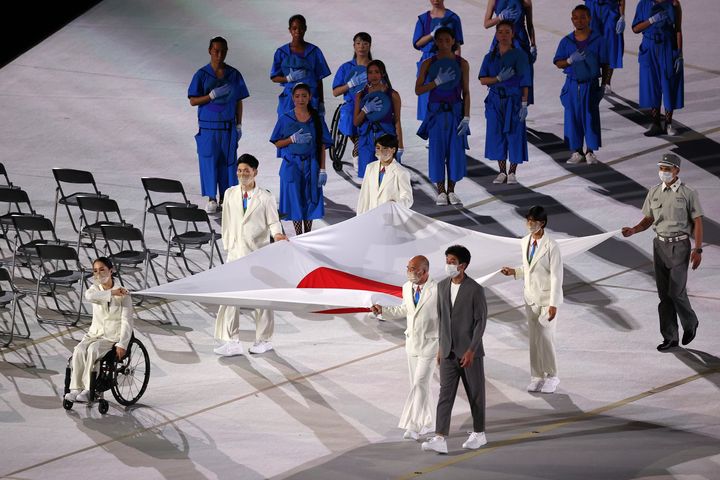 Alex Pantling via Getty Images The Japanese flag is carried into the stadium during the opening ceremony of the Tokyo 2020 Paralympic Games at the Olympic Stadium on Aug. 24, 2021 in Tokyo.

Tokyo and Paralympic organizers are under pressure from soaring new infections in the capital. About 40% of the Japanese population is fully vaccinated. But daily new cases in Tokyo have increased four to five times since the Olympics opened on July 23. Tokyo is under a state of emergency until Sept. 12, with the Paralympics ending Sept. 5.

Organizers on Tuesday also announced the first positive test for an athlete living in the Paralympic Village. They gave no name or details and said the athlete had been isolated.

The Paralympics are being held without fans, although organizers are planning to let attend, going against the advice of much of the medical community.

Parsons and Seiko Hashimoto, the president of the Tokyo organizing committee, say the Paralympics can be held safely. Both have tried to distance the Paralympics and Olympics from Tokyo’s rising infection rate.

“For the moment we don’t see the correlation between having the Paralympics in Tokyo with the rising number of cases in Tokyo and Japan,” Parsons told The Associated Press. 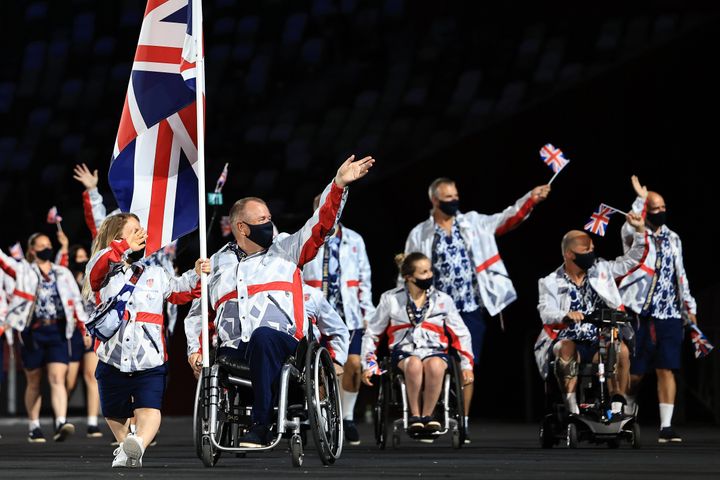 Buda Mendes via Getty Images Flag bearers Eleanor Simmonds and John Stubbs of Team Great Britain lead their delegation in the parade of athletes during the opening ceremony of the Tokyo 2020 Paralympic Games.

Some medical experts say even if there is no direct link, the presence of the Olympics and Paralympics promoted a false sense of security and prompted people to let down their guard, which may have helped spread the virus.

The Paralympics are about athletic prowess. The origin of the word is from “parallel” — an event running alongside the Olympics.

Markus Rehm — known as the “Blade Jumper” — lost his right leg below the knee when he was 14 in a wakeboarding accident, but earlier this year he jumped 8.62 meters, a distance that would have won the last seven Olympics, including the Tokyo Games. Tokyo’s winning long jump was 8.41 meters.

“The stigma attached to disability changes when you watch the sport,” said Craig Spence, a spokesman for the International Paralympic Committee. “These games will change your attitude toward disability.

“If you look around Japan, it’s very rare you see persons with disabilities on the street,” Spence added. “We’ve got to go from protecting people to empowering people and creating opportunities for people to flourish in society.” 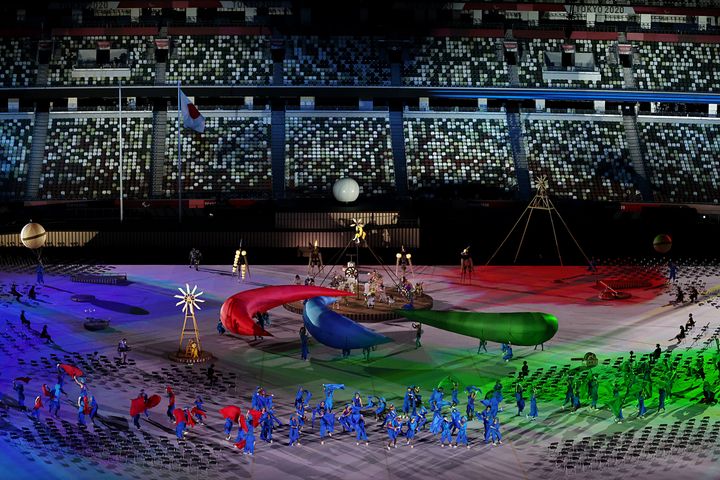 Naomi Baker via Getty Images Entertainers perform during the opening ceremony of the Tokyo 2020 Paralympic Games at the Olympic Stadium on Aug. 24, 2021.

Archer Matt Stutzman was born with no arms, just stumps at the shoulders. He holds a world record — for any archer, disabled or otherwise — for the longest, most accurate shot, hitting a target at 310 yards, or about 283 meters.

Wheelchair fencer Bebe Vivo contracted meningitis as a child and to save her life, doctors amputated both her forearms and both her legs at the knees.

“So many people told me that it was impossible to do fencing without any hands,” Vivo said in a recent interview. “So it was so important to me to demonstrate and show people that it doesn’t matter if you don’t have hands, or you don’t have legs or whatever. If you have a dream and you really want to achieve it, just go and take it.”

Stutzman and Vivo are both set to compete in Tokyo and have already won medals in previous games, superstars who told their stories last year in the Netflix documentary about the Paralympics called

The rest of the 4,403 Paralympic athletes in Tokyo — a record number for any Paralympics — will be telling their stories until the closing ceremony.

“I feel like I’m meeting movie stars,” said 14-year-old Ugandan swimmer Husnah Kukundakwe, who is competing for the first time.

She acknowledged being a self-conscious adolescent, even more so because of a congenital impairment that left her with no lower right arm, an her left hand slightly misshapen. 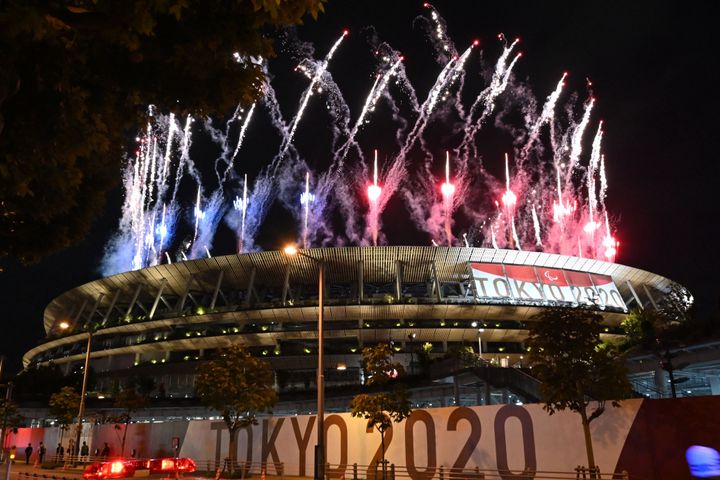 KAZUHIRO NOGI via Getty Images Fireworks light up the sky above the Olympic Stadium during the opening ceremony for the Tokyo 2020 Paralympic Games.

“Since it’s the Paralympics and everybody else is disabled, I feel really comfortable with myself,” she said. “In Uganda, there are very few people who have disabilities who want to come out and be themselves.”

Paralympic organizers played a part last week in launching a human-rights campaign aimed at 1.2 billion people — 15% of the global population — with disabilities. They’ve also produced a to promote the cause of social inclusion.

Shingo Katori, a member of boy band SMAP that had its roots in the 1980s, now works with Paralympic organizers. He acknowledged his early fears of working with people with disabilities.

“Frankly speaking, people in wheelchairs or people with artificial legs — I hadn’t had an opportunity to meet these people and I didn’t know how to communicate with them,” he said. “But through Paralympic sports, such hesitation faded away.”

Stutzman, known as the “Armless Archer,” has a disarming sense of humor — pardon the pun. He jokes about growing up wanting the be like former NBA star Michael Jordan.